It all happened one rainy afternoon in January.  I work in a wonderful, caring environment 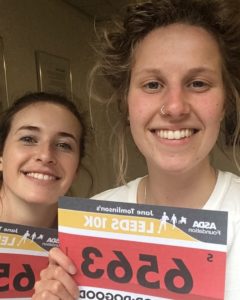 with lovely people.  Some of them are considerably younger than me and very fit – they go rock climbing for fun kind of fit!

“Gill we really want to do the Leeds 10k and think you should do it too. We could train together. It will be great fun and we’ll raise some money for Phoenix.”

I’ll be honest, it was the money part that swung it for me.  I never believed that these speedy twenty-somethings would train with me and I certainly didn’t buy the ‘fun’ part!

But you know how it is….it was January and July 7thwas a long time away – months, even half a year! So, lulled in to a false sense of security by the fact that anyone can learn to run 10k in 6 months I signed on the dotted line.

My friends, family and contemporaries were somewhat shocked to hear that I had agreed to do a 10k run. None of them would agree to do it with me despite my pleading!  I was left on my own with my panic and fear. Like always I popped the panic and fear into a brightly coloured box at the back of my brain, lid firmly in place, and forgot about it.

So along came April and the realisation that it was only 12 weeks to the Leeds 10k and I hadn’t even got myself any running shoes.  Off I went with my friend Simon (a runner) to offer advice. £120 later I had THE SHOES!

Another friend, who doesn’t run (!) suggested that I download the Couch to 5k app and get Jo Whiley to inspire me. With music and Jo Whiley’s calm voice in my ears I attempted my first jog.  It was agony!

Everyone needs a break. Right? So, I went off on holiday and missed a week of Jo Whiley’s company. Another week was written off due to ill health and then just last week disaster struck.

My music was playing and Jo was chatting in my ear about how on this occasion I was going to run for 20 minutes!!! The longest time yet but “Don’t worry. You can do this” Jo cheerfully announced.

A not fit, non-runner!

It was drizzling. A steady grey downpour. I started slow as advised by Jo W. After a period of time that seemed like a working day she announced that I was half way through. I had run for 10 minutes! She congratulated me and encouraged me to continue. So I did.

I listened to several tracks and trotted on with my breathless jog.  After a while I suspected that something was wrong.  I looked at my phone and sure enough Jo had switched herself off just after the 10 minute mark.

I have no idea how long I ran but I do know that I couldn’t move my legs the next day.  The pain was excruciating!

I have never in my life had a sports massage. I’m not the sporty type so it can’t be for me.  I was persuaded to give Libby a chance at healing my leg and frankly had nothing to loose.  Two sessions and one week later I could walk again and get back in to training.

So, this is the problem.  I am at week 5 of Couch to 5k and have just had a week off so that my sore legs can recover from being abandoned by Jo W. The programme is 9 weeks long.

Basically, by 7thJuly I will be able to almost hobble for 5k if I’m lucky. But what about the other 5k? I’m really hoping that adrenalin and the atmosphere will carry me through.

I need something to give me a mental boost. To encourage me when I hit the wall. To keep my legs taking each step…. Only one thing will work for me now.

A hefty chunk of sponsorship!

I need to know that the pain is worthwhile so please sponsor me.  Use this link here and give whatever you can. Any amount will be very much appreciated.

All of the money that we raise will go towards helping Phoenix Health and Wellbeing support more people with chronic health issues.  People like Anne who was referred to us for massage therapy by her GP. She has a genetic skin disorder called Darier’s disease which is where huge blisters form on her skin. These blisters are extremely painful and can often take up to 6 months to heal. 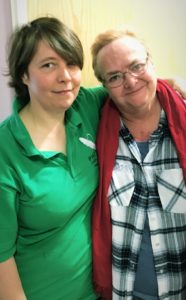 She is permanently on morphine and she has had to have her nails and her teeth removed because of the medication she is on. Anne was diagnosed with Dariers’ when she was 19, she is now 64.

Often Anne gets so low she feels suicidal. In the last 5 years she has attempted suicide 4 times. Her GP thought massage therapy might help her to manage her suicidal tendencies so he referred Anne to Phoenix Health and Wellbeing in February 2019.

Since she has been coming to Phoenix for Reiki treatments Anne has only had one minor breakdown and no suicidal thoughts. For Anne, 4 months without suicidal thoughts is incredible. Reiki makes her feel relaxed and gives her a break from her constant anxiety about her skin condition.

Phoenix Health & Wellbeing is a Charity.  By coming to us for a treatment you are helping others less fortunate than yourself. We use the proceeds of your treatment to subsidise those who would not otherwise be able to access our therapies. Roughly £4 to every £10 spent with us will go to help others.

How to choose a counsellor

This website uses cookies to improve your experience while you navigate through the website. Out of these, the cookies that are categorized as necessary are stored on your browser as they are essential for the working of basic functionalities of the website. We also use third-party cookies that help us analyze and understand how you use this website. These cookies will be stored in your browser only with your consent. You also have the option to opt-out of these cookies. But opting out of some of these cookies may affect your browsing experience.
Necessary Always Enabled

Any cookies that may not be particularly necessary for the website to function and is used specifically to collect user personal data via analytics, ads, other embedded contents are termed as non-necessary cookies. It is mandatory to procure user consent prior to running these cookies on your website.